My extended series on Cultural Geography of Survivor Communities took a year to write. I completed it December 31, 2019. Much has happened since then. We’ve seen some leaps forward, some steps backward.

In an August 20th Twitter thread about what’s going on in our various communities and denominations, the issue of abuse solutions that scale came up. This sparked a lot of thoughts for me on where we are at and where we are going. I posted 20 tweets throughout the day.

The way my brain usually works, I don’t necessarily know what I’m thinking until I get it out of my head by either saying it aloud or writing it down. Partway through this bunch of tweets, I surprised myself at a conclusion that was forming: I realized I was relatively hopeful about the progress and trajectory of abuse survivor communities, and that this sense of a constructive pathway forward was based in patterns I could see in concrete actions–not mere “I hope so …” musings attached to imagined concepts.

Here is the Ruth D. Hutchins’ tweet that set up the consideration of scale, and a compilation of my responses. I have edited this slightly for clarity and to change abbreviations back to their full form. 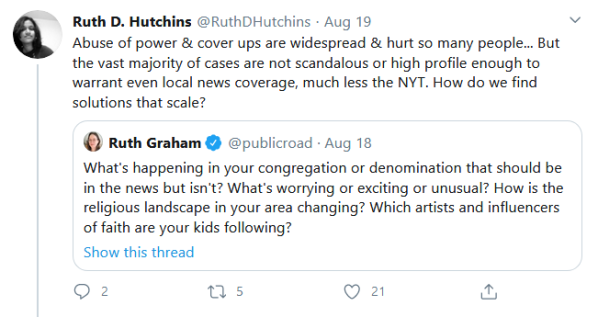 Coming from Google I think a lot about scale… It's why I think @JDoeJustice is such an interesting approach.

It doesn't scale… It takes so much time and effort to research a case and there aren't that many bloggers in this space. And it doesn't work – churches ignore bloggers bc they don't have enough of an audience. It's only when "real" media gets involved that churches start to act

I've only been blogging a year & had one pastor forced to step down because of posts I wrote. It's not target shooting, for sure, but bloggers DO make an impact. Jules Woodson's story & Karen Hinkley at The Village Church are 2 other examples of bloggers forcing movement.

A lot of thoughts about issues of scale …

The three largest case studies I did research writing on took at least 350 hours each — the frivolous libel lawsuit against blogger @DefendTheSheep, Mark Driscoll and Mars Hill, and Emergent Village. Tullian Tchividjian ~200+ hours. 1

A lot of thoughts about issues of scale … The three largest case studies I did research writing on took at least 350 hours each — the frivolous libel lawsuit against blogger @DefendTheSheep [Julie Anne Smith], Mark Driscoll and Mars Hill, and Emergent Village. Tullian Tchividjian about 200+ hours. 1 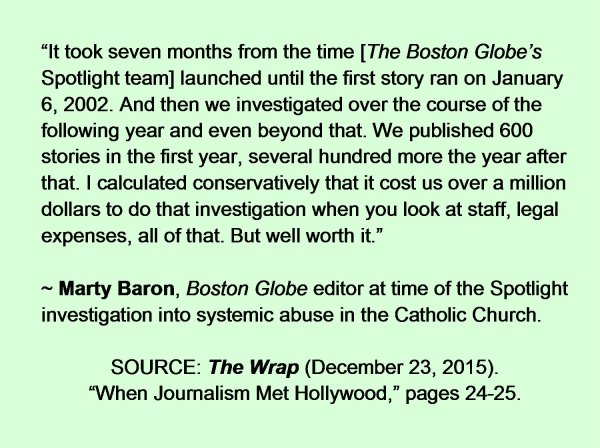 Periodically, over the last about 15 years, some longer-time “survivor bloggers” have discussed (even strategized) how to create some kind of archive or link clearinghouse on major cases of abuse–because the main actors keep resurfacing in new situations as if there’s no history. 3

It would likely take a specific calling for someone to do such an archive. But what’s available already is valuable for (1) responding to perpetual accusations of “gossip-libel-slander” against abusive ministers and their protectors, (2) seeing patterns across forms of abuse, … 4

and (3) drawing out the essential processes for survivors and advocates who choose to make public their situation. I.e., do-it-yourself templates for how to externalize our stories, discern whether this is the right time to post, deal with potential push-back. Lots available. 5

No need to reinvent the wheel, but our broader survivor communities could certainly use a wheelhouse to look in for it! Circling back around to issues of scale, with a malignant disease metaphor, it may take a single “magic bullet” to stop it, or a scattering of smaller doses. 6

Maybe the broader the overall coverage, even with many more smaller local situations instead of only ones for mega-ministries or toxic systems, cumulative weight over time makes significant difference. Also, individual situations help establish a base for seeing system patterns. 7

Scale is a tough element to figure. But I wonder if impetus is stronger, now that we’re several years into the #MeToo hashtag campaign. Community is documenting abuse in domains/industries; and there’s potentially more notice by SOME denominations’ overseers. Some hopeful signs! 8

Add-ons as I keep thinking about scale issues. The more smaller to larger situations that go public, and the patterns within a category (e.g. theological stream, polity, org system type, gender (in)equity) get clarified, the more “meta” level themes emerge that bear repeating. 9

This can strength the case any given specific situation, knowing the tactics are proving to be similar within and across large categories. For instance: “Research shows tactics abusers use in DV parallel those in spiritual abuse, clergy sexual misconduct, sexual harassment.” 10

“CDC statistics show 1 in 3 women and 1 in 4 men in U.S. will be victimized by sexual abuse/violence in their lifetime. That’s about 30% of our population. How does our [church / denomination / mission / ministry] show it cares about this huge group in congregation and community?” 11

“It’s been shown there are numerous abuse cases across multiple denominations with a theological foundation similar to ours. What is it in our doctrine that we believe or how we behave that doesn’t deal with this? What are we going to do to intervene now, and prevent it then?” 12

Specific situations/details, patterns within categories, macro-themes across categories — all maybe contribute toward the growing weight of a need for righteous action. Maybe scale requires a long-haul mentality, while building interlocking pieces as we can in the present … 13

I’M HOPEFUL! As I noted in a recent review: “As a futurist, I am always scouring the horizon for resources that focus in on paradigms, paradigm shifts, and the most preferable ways forward in the midst of what is possible. As a Christian who strives to be a person of peace, … 14

… I seek resources that display hospitality and dignity toward all people; advocate for social righteousness/justice and against abuse of power; and promote mutual, Christward transformation in our relationships. As a Christian futurist, …. 15

… my radar is tuned in to what provides people genuine hope and meaning in the midst of suffering and change.”

While writing the “cultural geography” of survivor communities, it struck me how much progress there’s been in last 10 to 15 years. More bloggers, more reporters. 16

As dispersed community with common ties due to abuse, we are not alone, nor are we on our own. God has not abandoned us. He’s raising up survivors, advocates, activists at every level. We’re growing in numbers, deepening in understanding, amplifying our push-back against abuse. 19

We may feel feeble, exasperated, worn out. And that may be our personal state right now. But–in the big picture and the long view–*as a community* we truly have made noteworthy progress. Scale is always an issue. Maybe we consider our tipping toward sustainability as part? 20

Love this thread, Brad. Your work, insight, and voice have been so valuable to me over the years. Oh…we can add friendship, too. 💞

Index Pages on This Site